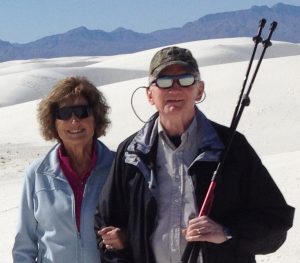 Larry Stanfel, a professor emeritus at the University of Alabama, earned his PhD from Northwestern University. Twice the winner of competitive postdoctoral fellowships for research abroad, he has been listed in Who’s Who in America and was selected for a number of honorary fraternities. He has worked frequently as a consultant to government and private businesses and has been an invited speaker around the world. Presently he and his artist wife, Jane, live on a small ranch, pictured below, in Montana.

Larry has published nearly 100 articles and poems, most of them peer-reviewed. Several of his stories have appeared in print or web journals, and his prize-winning fairy tale, “The Princess of Evighet,” was the libretto for a ballet of the same title staged by the Coastal Ballet Academy of Foley, Alabama in 2019. Under the title “Mice Christmas,” his English lyrics for the Norwegian Christmas song, “Musavisa” are registered with ASCAP.  For a number of years he recited his original poems at the annual Montana Cowboy Poetry Gathering in Lewistown, MT and published them in periodicals.

Stanfel spent twelve years exhaustively researching the lives and work of Helen West Heller and her husband, Roger, and is considered the world’s leading authority on the pair.  His book, Uncompromising Souls, is the first and only biography of the artist and her eccentric husband, whereas his Complete Poetry of Helen West Heller is the sole compilation of her poems.
Between October, 2019 and July, 2020 Larry and Jane created for the Roundup Record and Tribune a weekly column on the history of Montana’s settlement. For twenty years a student of ballet, Larry has appeared in Billings in recitals staged by the School of Classical Ballet and by Movement Montana.